At the entrance to the Höhlenstein Valley there is an impressive building: the Grand Hotel Toblach. The edifice was erected by the Südbahngesellschaft, the Austrian Southern Railway Company – in the hope that it would attract more passengers to the new railroad line. It was the year 1878.

The building, which was continuously expanded over the years, once attracted an elite clientele from all over the world to the Puster Valley. But after decades of prosperity it also experienced difficult times, for example during the two world wars. 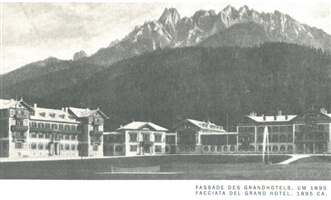 As a consequence, the Grand Hotel Toblach was used for various purposes before the large complex was finally extensively renovated and reconfigured in the 1990s. Where 100 years ago prominent and well-heeled guests were relaxing, a center for culture, music, nature and recreation was now created.

An impressive structure at the entrance to the cave stone valley

Today the building houses the Euregio Cultural Center with the impressive Gustav Mahler Auditorium as well as its Guest House, the Upper Puster Valley Music School, the Three Peaks Nature Park House, the Upper Puster Valley Youth Service, and the Youth Hostel. In the middle of the spacious park the Michelin-star restaurant "Tilia" of Chris Oberhammer is situated, and the Green Auditorium in the park is an ideal location for open airs and other outdoor events.

The Grand Hotel in Toblach is an perfect starting point for bikes, for an excursion to the Forest Wonder World, or for various walks amid the mountain scenery of Toblach.