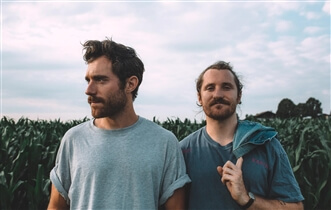 Cultural Center Euregio Dobbiaco
Twin brothers Josef and Jan Prasil were born in Germany and raised in Italy. With parents originating from Czech Republic and Australia, they eventually moved to Australia to further propel their music career.
Finding themselves in the soundscape of a modern Simon and Garfunkel with influences from the likes of Ben Howard, Kings of Convenience and Kodaline, Amistat are definitely best enjoyed live. A safe place to be, to feel, to heal and to inspire. Their vocal harmonies create an unique synergy which stems from their contrasting personalities and musical styles blending together. Their authentic lyrics speak of what they have learned to be true in life and love, sharing their stories and songs about these lessons most of which they wrote while on the road.
Since 2012, Amistat have released four EP’s, ‘It’s Not Words’, ‘Somewhere Sometime’, ‘Nostalgia’, ‘Love and Light’ and their debut album ‘Parley’ which saw them embark on a number of Australian and European tours including  performances at some of Australia's finest Festivals such as Woodford  Folk Festival, National Folk Festival, Fairbridge and Nannup. The duo further won the Marton Guitar Emerging Artist of the Year 2018 Award at the Port Fairy Folk Festival 2018.
Celebrating the release of their latest EP ´Still Alive´ the duo have just come of off their European tour which will be commencing in May 2022.